So, you are telling me, to my face, that Cincinnati is the second-best team in college football? They barely beat an average Notre Dame team, struggled with Indiana, and just demolished their closest competition in the AAC in UCF.

The Bearcats will win out and do what Iowa failed to do last weekend. The Hawkeyes honestly blew a perfect path to the playoffs by losing at home to Purdue. Purdue dominated Nick Saban once upon a time, but they also had a guy named Drew Brees on the sideline. I doubt that was the case in Iowa Saturday… yikes.

Oh, what about the SEC? There’s not much happening there – just a future dead man walking at Florida losing to a guy that was already a dead man walking at LSU. That game was just the first slice of bread on an insane SEC Football Saturday Sandwich. The middle of that sandwich had Georgia’s continued domination and Mississippi State getting a taste of a pissed-off Bama. However, Tennessee said hold my beer, er mustard – wait golf balls, cause it’s time to sling shit!

So, now I ponder! Don’t forget, LISTEN TO THE PODCAST!

Hollywood on the Bayou

I joked last week about Dan Mullen being on the hotseat at Florida. I don’t think that’s really the case – or better yet, I didn’t. Our first Hollywood look alike, Cousin Eddie Mullen, keeps blowing games, and the jort-nation in the Swamp want to send him to Zook-land. 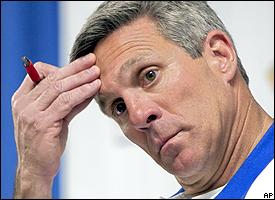 If you’re wondering where Zook-land might be, that’s a mid-tier B1G school – see also Bret Beilema. Mullen’s career ending at a place like Illinois seems fitting.

On to our second Hollywood look alike, it wasn’t a matter of “if” the defensive coordinator from the Waterboy would get fired – heck we have been claiming it here in different forms for two years – it was a matter of “when”.

Ironically, when I used the heading ‘O-Ver’ last week for the LSU section in my ponderings, I had no Idea it actually was happening – likely during those hours. It appears that LSU was waiting until after the Florida game to make the announcement.

We’ve joked about the Bama Test, we predicted Coach O’s downfall with mind blowing precision on our podcast, and we’ve called him Coach O’chizk for over a year, so what happened wasn’t actually a shock to us.

(skip to the 11:07 mark or use the chapter link for the reference)

BUT – only at LSU does a coach announce he is resigning after his biggest win of the year. For those that don’t know, this is the same school that was ready to run off Saban after year one. Yes, the same program that in 1979 fired their winningest coach in their history, Charlie Mclendon, because he couldn’t beat The Bear and Alabama. So again, the firing wasn’t such a surprise. The surprise was the stupid hire in the first place. No idiot has fallen upward more than this guy.

To those that point out O’Chizik can recruit, I get it. And I say, so what? He failed at Ole Miss and fell into interim roles at USC and LSU – due to incompetent leadership. The latter kept him as a head coach, and he won a title with the two Joe’s. That brings us to the weird press conference last Sunday night – just 22 months later.

Everyone can now turn their closed captioning off for LSU press conferences – not that CC even understood him. Yaw Yaw Yaw is leaving the building… and let’s hope it’s for good.

…when referring to Bo Nix, you should be punched in the face. It was stupid when it was said about Bo Wallace of Ole Miss, and it is equally as stupid to say of Nix at Auburn. Both QBs are what they are – not bad, but not great.

Nix is capable of disappearing at times, but he is also capable of what we saw at Arkansas this weekend and in Baton Rouge a few Saturdays back. That’s two incredibly tough environments where he has played really well this year. Auburn is going to be a tough out for anyone they play. I’m interested to see what Harsin does down on The Plains. He made a statement last weekend when his Tigers…

…stuck a fork in The Pigs.

Sam Pittman is a cute story and fits that Pig Hat wearing program perfectly, but they have been exposed the last few weeks. They don’t have the talent or the depth to compete with the upper tier of the SEC. However, I love watching the Jefferson kid at QB. He plays with a ton of heart. Outside of that, I enjoy watching the pig’s squeal. Speaking of animals.

To all of your fans, except the “one” I know: may the fleas’ of 1000 camels infest your crotches and may your arms be too short to scratch them.

That heading refers to Matt Corral.

I love Eli Manning. I didn’t miss a home game while he was in Oxford and very few on the road. I never saw him do what I have seen Matt do the last two weeks – especially at Neyland. He did it in front of what seemed like a scene from a European soccer death match. That place was bananas. So much for them being over Lane.

Corral was without his top two receivers, his top tight end, and his left guard. Anybody that knows the Ole Miss history knows they don’t win these types of games, and yet, here they are. Matt is different. Lane is different. Ole Miss now seems different. I hope it lasts.

Props to the Ole Miss defense. One week after triggering PTSD in their fans, they stepped up when it was needed most. It wasn’t like the 2020 defense. They did it by bringing pressure.

Who would have known that if you rush a QB, he sometimes messes up? Or that sometimes it gets really nuts and you tackle him. Anyhow kudos, do it again.

Note to Any and All Listening

Don’t piss off Will Anderson – signed Charles Cross, Mississippi State left tackle. Not only did State get to be Bama’s “after a loss, we’re pissed” punching bag. They also got to feel the insane wrath of one of the most disruptive players this league has seen in a while.

Anderson brought back memories of Derrick Thomas to my cohost and many others Roll Tiders, and I understand why. Anderson’s 4 sacks were just 1 shy of DT’s single game record. Bama just reminded everyone who considered doubting them last week to stop.

In other news, water is wet.

Remember when Mississippi State would give Bama a fight every year? Fast forward to today, and The Pirate’s Air Raid has yet to score a TD on Bama – in 2 years as the Bulldog’s head coach. I assume State fans see it coming. It’s just a matter of admitting it and moving on quickly. And… Bama wants to fire their defensive coordinator?

Spitting Fire Around the League

Georgia – People keep trying to doubt, and they just keep dominating. Can anyone force them to press offensively? That’s the only question left. Bless…

Kentucky – They gave it their best effort and played it better than I thought they would. It wasn’t a complete push over, but they still lost by 17. I have a feeling second place in the East and a New Year’s Bowl will sit fine with the good folks in Lexington. I say good folks, but I must remind myself that their football fans become their basketball fans in two months.

South Carolina – You had to score a TD with 37 seconds left to beat Vandy. And it took them Vandying to do it. Good luck with that, Beamer.

A&M – The cult went to the team that should be exiled from the SEC, Mizzou, and won. No one actually watched the game, so I’m not sure how we know the score.

Mizzou – If Ole Miss can change something as serious as a mascot every three years, then surely, we can swap teams in the same fashion. Let’s do that now.

The Other Teams that Play Football

Iowa, all you had to do was beat Purdue, Wisconsin, Northwestern, Minnesota, Illinois and Nebraska to get a shot at Michigan or Ohio St for a spot in the playoffs. I get the championship game was going to be a challenge, but one of eight different SEC teams could have skated thru that kindergarten court of a remaining schedule, and you blew your number 2 ranking out of the gate with a loss to Purdue. Impressive. 👏

Mike Gundy and his masterful Mullet are quietly undefeated, and they are heading for a pretty big showdown, potentially for a playoff spot with Oklahoma. Their defense is the only one in the B12 with a pulse.

For every 10 likes on this, I will make Gundy’s mullet bigger. pic.twitter.com/SfvLCVqQUn

I told everyone in this space a few weeks ago that the Pac-12 was legit. I was wrong. None of their teams want to take the mantle. The supposed good teams are losing to the bad ones. It really is the SEC and everyone else. It just means more…doesn’t it, Tennessee.

If you have made it this far, you are a Saint and I will tell the “Big Man” myself!

Leave me a comment below to let me know what you think! See you all next week! Also, LISTEN TO THE PODCAST!!